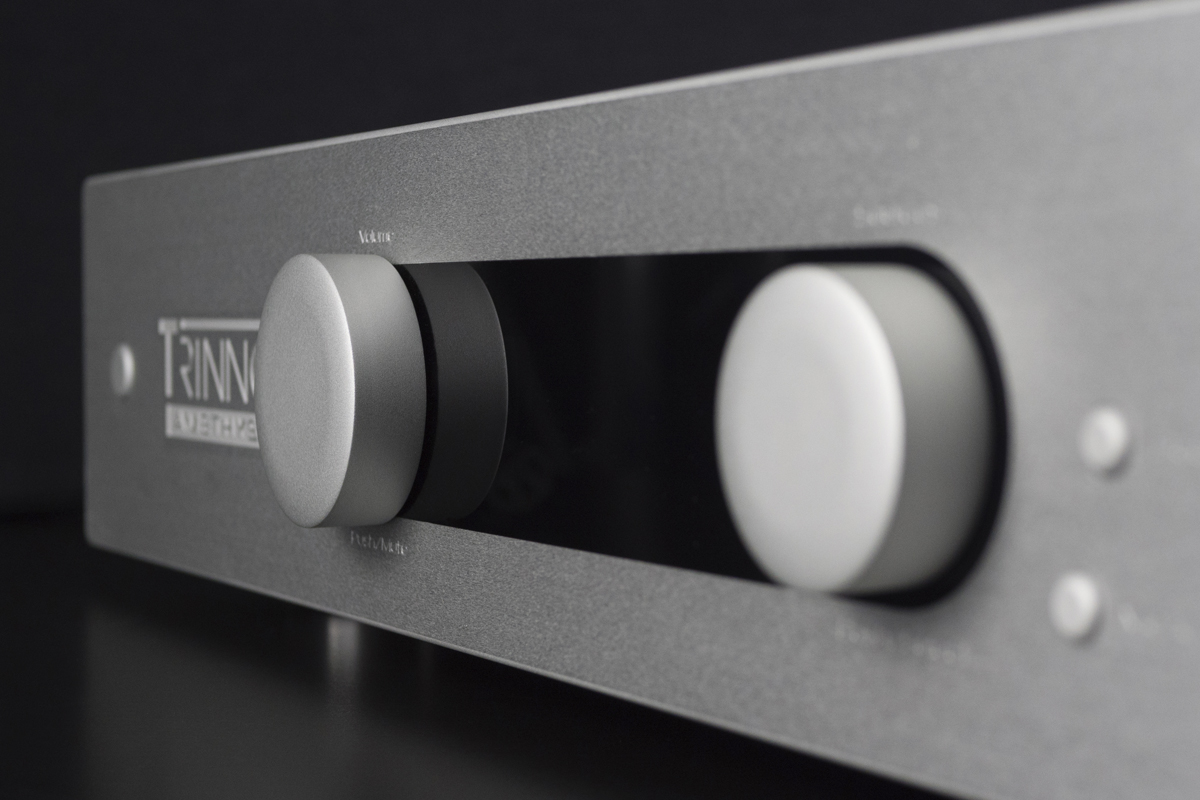 In an editorial posted late last year, I surveyed the limited field of hi-fi components that include room-correction processing. One product I mentioned was Trinnov Audio’s Amethyst ($10,000 USD), a stereo DAC-preamplifier featuring Trinnov’s proprietary Optimizer. Interviewing a Trinnov rep about the company’s innovative approach to dealing with the interactions of loudspeakers with domestic rooms, recording studios, and movie theaters made it clear that the Amethyst was something I wanted to check out in my own system.

How does Trinnov’s Optimizer work? The loudspeaker/room-optimization technology uses a special 3D microphone to make time- and frequency-domain measurements. The Optimizer then analyzes those data to identify and correct for the speaker’s direct response, and to mitigate the effects of early reflections; subsequent reverberations are largely left alone. Frequency-domain measurements are also used to minimize room modes, the Optimizer generating precise compensation filters that extend up to 300Hz. All of these optimizations can be adjusted to suit the user’s personal taste.

The Amethyst is a unique entry in the otherwise conservative world of stereo preamplifiers: along with the Optimizer technology and built-in DAC, Trinnov’s preamp is network-capable, Roon-ready, and has a built-in moving-magnet phono stage. It streams up to 24-bit/192kHz files in FLAC, WAV, or AIFF formats via wired Ethernet or Wi-Fi, and can serve as a DLNA digital media renderer. Incoming analog signals are converted by the Amethyst to 24/96 resolution, and its two-way active crossover can be configured for single- or dual-subwoofer setups, or for an active 2.0-channel configuration.

For a preamp packed with so many features, the Amethyst’s brushed-aluminum faceplate is surprisingly minimalist: two large control knobs enable source selection and volume adjustment, and there are buttons to enter and exit setup menus and to power the unit on and off. A large monochrome LED display indicates the source, the volume level (in 0.1dB increments), the sampling rate of the incoming signal, and if the Optimizer is in Active or Bypass mode. Trinnov designs, makes, and assembles all of its products in France.

The digital audio inputs include two each AES/EBU, coaxial, and optical connections. There’s a pair of balanced inputs (XLR) for analog sources, and two sets of analog input jacks (RCA). Audio outputs include two each AES/EBU digital, coaxial digital, and balanced (XLR) and unbalanced (RCA) analog. There are also BNC word-clock in/out jacks, a phono ground connector, and a switch to configure one of the RCA analog inputs as either a phono- or line-level connection. 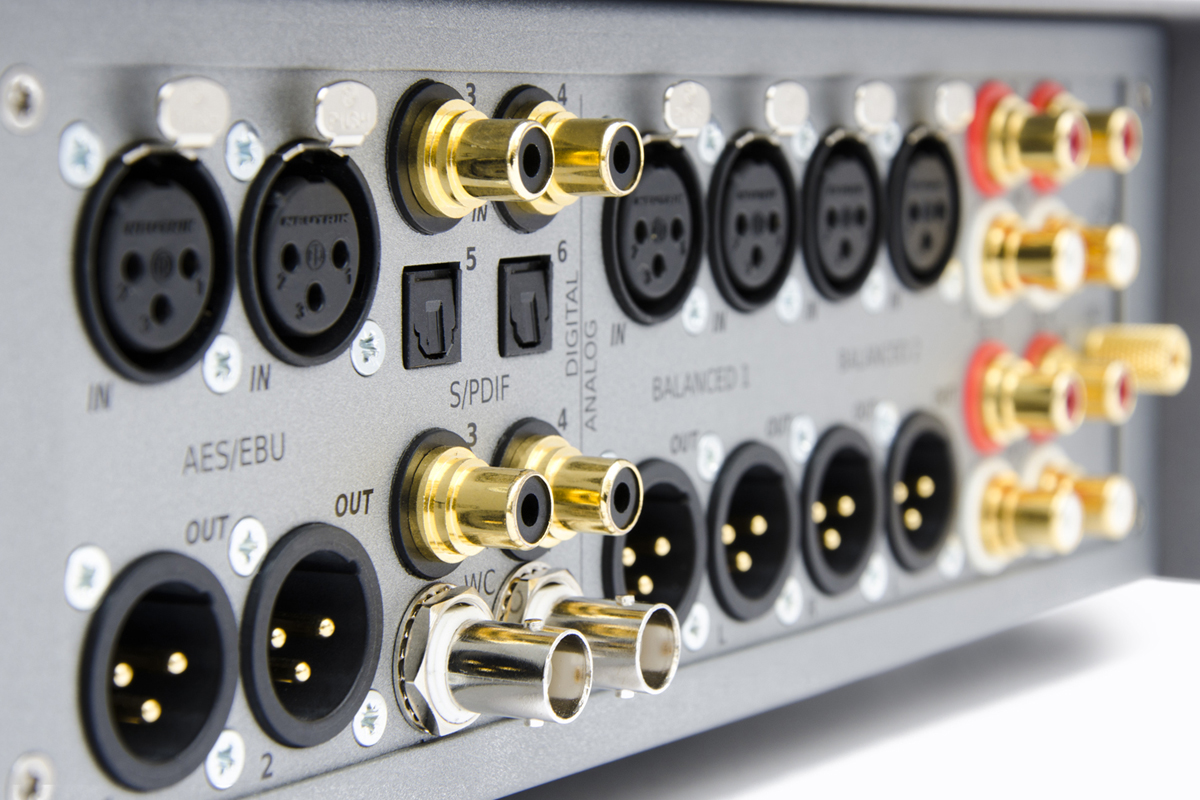 Because the Amethyst packs a micro-ATX motherboard to run its Optimizer functions, its rear panel also has the following data and video connections: LAN and USB ports, DVI and VGA video outputs, and keyboard and mouse connectors. You can connect peripherals to these for initial Optimizer calibration and setup. Another alternative is to link to the Amethyst over a network using a remote desktop control app (e.g., VNC Viewer).

Trinnov also supplies a regular remote control. This slender, aluminum-faced handset has dedicated buttons for selecting input sources and controls for navigating menus. Buttons at the bottom let you adjust the volume and the display’s brightness level, mute the output, and bypass Optimizer processing.

Running the Optimizer calibration routine requires Trinnov’s 3D measurement microphone (a $700 option, though Trinnov dealers supply one during installation). The mike comprises four omnidirectional capsules mounted in a tetrahedral pattern, which allows it to precisely measure the positions of the speakers in both the horizontal and vertical planes. After mounting the mike on a tripod to raise the capsules to the position of my head when I’m sitting at my primary listening spot, I connected the included four-connector mike cable to one of the Amethyst’s balanced XLR inputs. 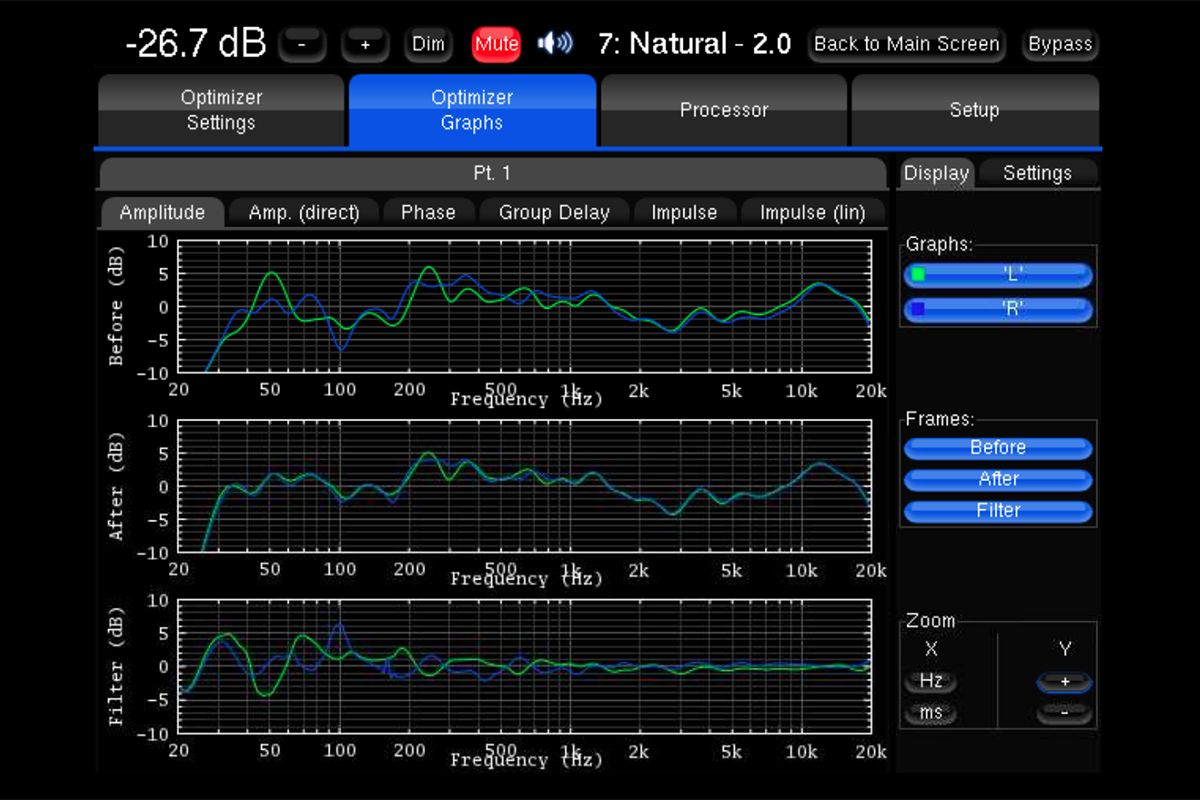 To execute the calibration, I used my MacBook Pro to connect to the Amethyst’s VNC server over the network, and then configure settings via the preamplifier’s GUI. Running the Optimizer wizard proved far simpler than other room-correction systems I’ve used: The preamp generates test tones for the left and right speakers, and takes measurements from a single mike position. That done, the Amethyst generates five separate compensation curves with resolution levels up to 1/24 octave. You can display amplitude, phase, group delay, and impulse graphs for each mode, with options to view the graphs before and after the correction-filter data have been applied. Another option is to edit your own target curves, using subjective listening impressions to craft custom presets.

With 29 presets available, I ran measurements and generated curves for both the Triton Two and Triton Five towers. Since the Triton Two has a built-in powered subwoofer, I also made a point of boosting the sub output level, to see how well the Optimizer would deal with booming bass.

Switching through the modes and their respective correction curves, I found that the Natural preset provided the best overall sound: the bass tightened up and sounded more linear, while the mid- and high-frequency ranges were similar to what I typically hear with the Triton speakers in my room. Using the Target Curve editing mode in the Optimizer settings menu, I was able to create an even better-sounding custom preset that added a mild bass boost below 80Hz, but that tracked the Natural preset’s curve above that frequency, and yielded a significant improvement in impulse response.

The Neutral, Precision, and Monitoring presets all produced significantly flatter response for frequencies above 500Hz. The sound with these wasn’t bad, but there was a forward, dry quality to the treble that was off-putting with some tracks. Any improvements made by the Optimizer were more noticeable with the Triton Two, which goes deeper in the bass than the Five. 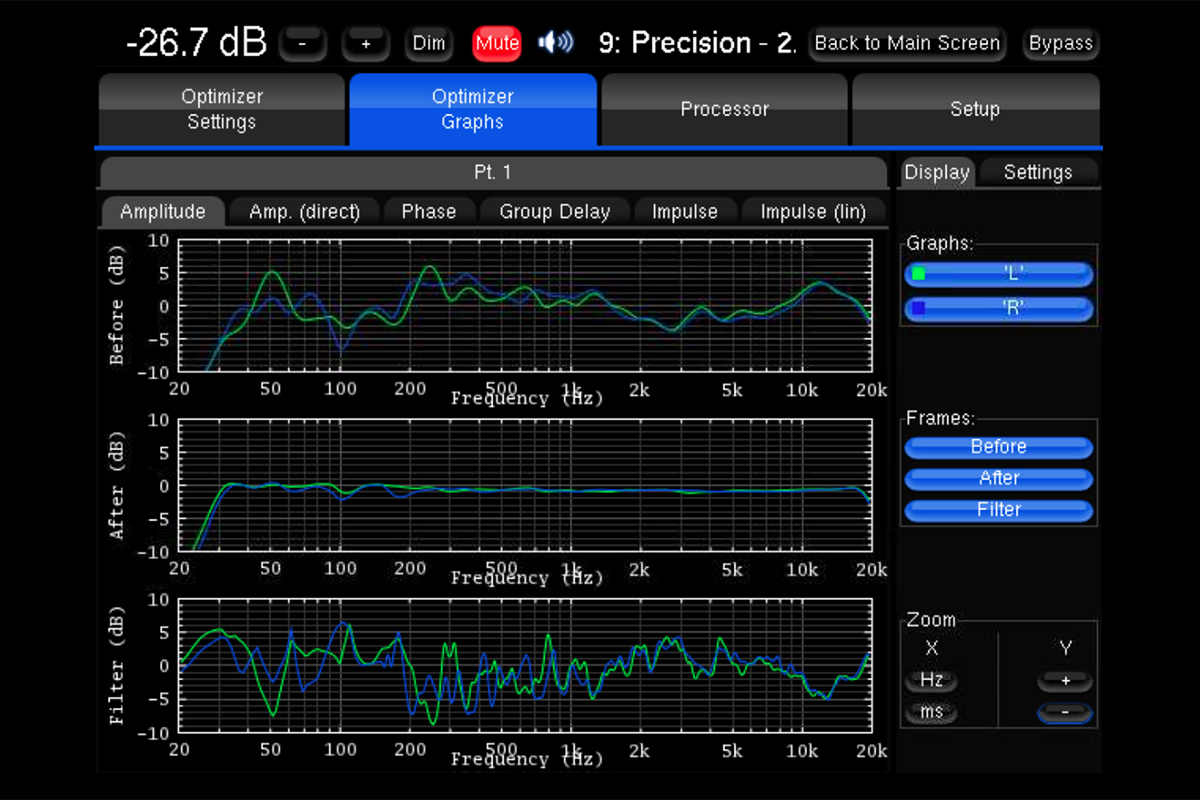 A good example of the Trinnov’s transformative powers was when I played “Darling,” from indie rock band Real Estate’s In Mind (16/44.1 FLAC, Domino/Tidal). Listened to in Bypass mode, the kick drum felt slow and heavy, its sound overlapping with the bass guitar’s. I turned on my custom preset and the difference was night-and-day: the kick drum now sounded taut and clean, and the bass guitar was detailed with no loss of fullness. When I then switched to Precision mode, the 12-string electric guitar sounded too crisp and edgy. There was also an overall lightness to the sound that I was happy to hear dissipate after switching back to custom.

I next listened to a jazz track, “Groundswell” from Arve Henriksen’s Towards Language (16/44.1 FLAC, Rune Grammofon/Tidal), and repeated the same sequence of presets. Switching from Bypass to Natural, I heard a distinct tightening of the bass, yet with no loss of power or extension. Henriksen’s trumpet also had more breathing room, which resulted in clearer separation of that instrument from the electric guitar and synths in the background. As expected, Precision mode pushed the texture of Henriksen’s breathy playing forward, making it almost uncomfortably intimate. Switching back to custom restored the proper balance. 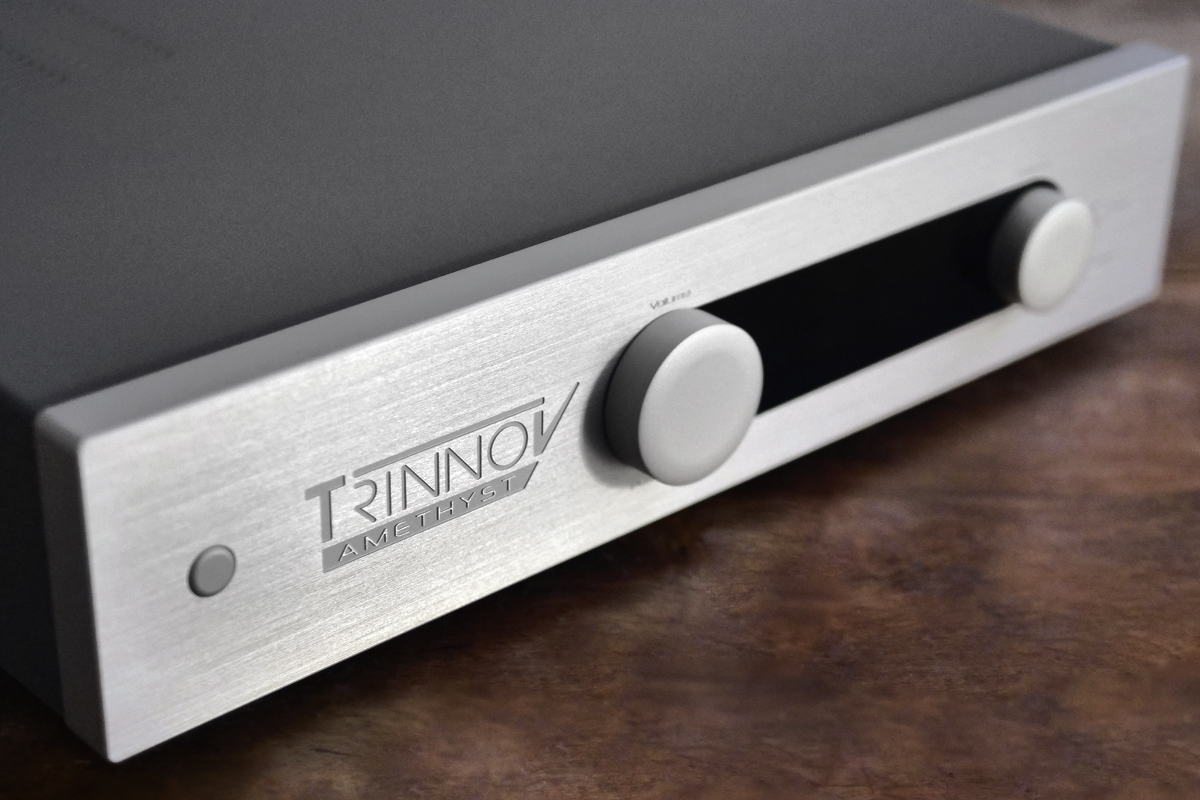 The same sense of opening -- of instruments and voices having more breathing room -- could be heard when I applied Optimization to “Black Dog,” from Vanessa Fernandez’s album of Led Zeppelin covers, When the Levee Breaks (16/44.1 FLAC, Universal/Tidal). With the Natural preset, the percussion sounded taut and quick, and lost much of the thuddy character I’d heard in Bypass mode. Fernandez’s clean, unprocessed voice was natural without being dry. The acoustic guitars also gained focus, and seemed more evenly spread across the soundstage.

I switched from Roon streaming to playing CDs. The Amethyst’s A/D conversion proved sonically transparent when I listened with my Pioneer universal disc player’s analog outs connected to the Trinnov’s analog ins. Ray Lamontagne’s voice retained the crisp character I normally hear when I play “Barfly,” from his Till the Sun Turns Black (CD, RCA 83328-2), and the interplay of drums and electric guitar had impressive dynamic snap. The preamp’s phono section also proved quiet. I spun a 1970s LP of Lorin Maazel conducting the Cleveland Orchestra in Rimsky-Korsakov’s Scheherazade (LP, London CS7098): Daniel Majeske’s solo violin emerged from a background of deep silence with a sweet, airy tone.

Trinnov’s Amethyst DAC-preamplifier-processor is one of those rare components that reveal immediate benefits on first hearing. After running the preamp’s Optimizer calibration, I noted a dramatic cleaning-up of bass definition and a related tightening of midrange focus. Soundstage depth improved, and I experienced clarity and precision from even the most densely mixed of my reference tracks. At $10,000, the Amethyst is hardly a casual purchase, though its Roon readiness and built-in phono preamp add value. If you have a troublesome room, or just want to hear how good your system can sound when problematic room/speaker interactions are removed from the equation, Trinnov’s Amethyst is well worth a listen.